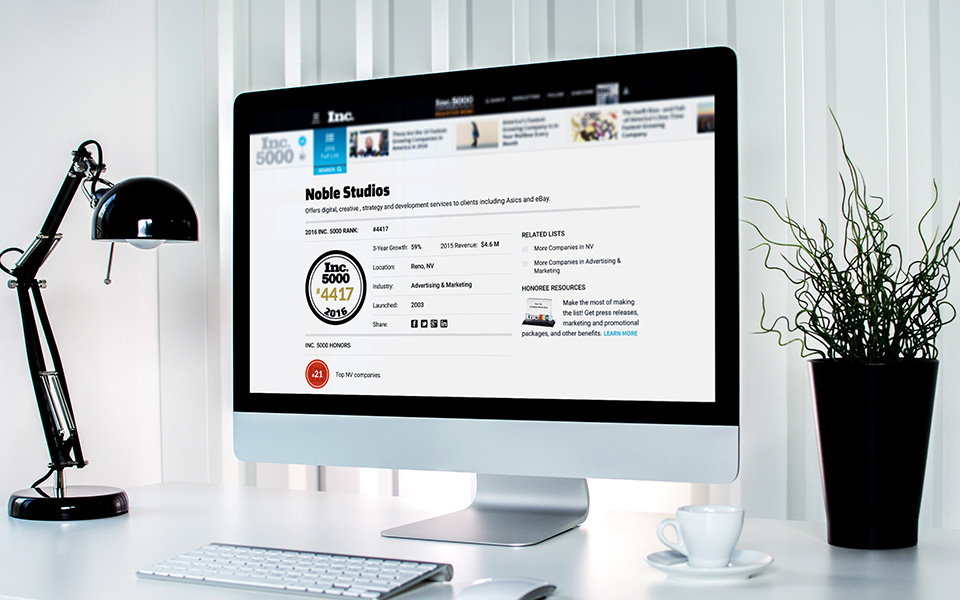 Noble Studios was recently named to Inc. magazine’s 500 | 5000 list of fastest-growing companies in America, marking the fourth year in a row for Noble’s appearance on the list.

Noble joins Microsoft, Square, Dollar Shave Club, ipsy, Yeti Cooler, LinkedIn, Yelp, Zillow and other prominent brands on the past and present list. Noble Studios is among only 21 companies from Nevada to make the list, and appears at number 4,417.

“We are honored to have made the Inc. 500 | 5000 list for four years in a row,” said Noble Studios CEO and co-founder Jarrod Lopiccolo. “We could not have gotten this far without our amazing clients continuing to challenge us to do our best work. This achievement is a direct reflection of our employees’ hard work, and we are excited to continue to grow and invest in the local northern Nevada community.”

The Inc. 500 | 5000 list represents an exclusive ranking of the nation’s most rapidly growing private companies and is a comprehensive look at the most important segment of the economy – America’s independent entrepreneurs. The list is ranked according to percentage of revenue growth from 2013 to 2015. To qualify, companies must have revenue of at least $2 million per year.

“The Inc. 5000 list stands out where it really counts,” said Inc. President and Editor-In-Chief Eric Schurenberg. “It honors real achievement by a founder or a team of them. No one makes the Inc. 5000 without building something great – usually from scratch. That’s one of the hardest things to do in business, as every company founder knows. But without it, free enterprise fails.”