Technological advancements in testing are revolutionizing how people learn more about their genetic make-up through services like Ancestry.com or 23andMe, but these direct-to-consumer genetic tests don’t offer a complete picture — especially when it comes to healthcare. Genome Medical provides genetic counseling and testing services to consumers, health systems and employers to improve healthcare, and came to Noble Studios seeking to increase awareness about all they have to offer through digital marketing.

In recent years, the rise in popularity of take-at-home genetic tests like those offered by Ancestry.com and 23andMe have saturated the market. While such tests are great for learning about one’s genealogy and some health risks, that’s about it. There is a missing education element to help customers understand their genetic testing results.

Genome Medical sets itself apart as the first and only telegenomics practice in the U.S. that provides various types of genetic tests and genetic counseling services to consumers. Using their clinical team of genetic experts, Genome Medical helps consumers choose the appropriate genetic test for their medical needs and family, interpret their genetic test results and integrate their findings into a patient’s healthcare.

As a startup company, Genome Medical sought guidance on how to determine optimal pricing for its genetic tests and counseling services, and greater exposure in an already noisy market to increase consumer awareness of their products and services.

Noble Studios partnered with Genome Medical to run a paid media campaign aimed at raising awareness for their genetic counseling services around the breast cancer (BRCA) gene and its many mutations.

While most consumer DNA tests on the market look for a select number of BRCA gene mutations, they don’t test for all BRCA gene mutations that can potentially mislead consumers about their genetic health risks. Genome Medical offers consumers pre-test consultations to accurately provide the right test for the right person based on their medical needs, family history and more.

Our creative and performance marketing teams developed a landing page and a series of Facebook and paid search ads that informed consumers about how genetic counseling and testing could help consumers get a clearer understanding of whether or not they had predisposal to cancer, and offer actionable steps to live a healthier lifestyle.

Dubbed the BRCA Campaign, messaging needed to clearly explain this unique quality about Genome Medical’s genetic counseling services to consumers in a way that was both informative and encouraged conversions.

Strategically timed to run in October in alignment with Breast Cancer Awareness Month and just before search volume spiked for direct-to-consumer genetic tests during the holiday season, the BRCA campaign was a true manifestation of Noble Studios’ creative digital performance services.

To maximize impact and allow for continual testing of the impact of certain ads, our team developed a landing page that informed consumers about how BRCA gene mutations can affect both men and women. 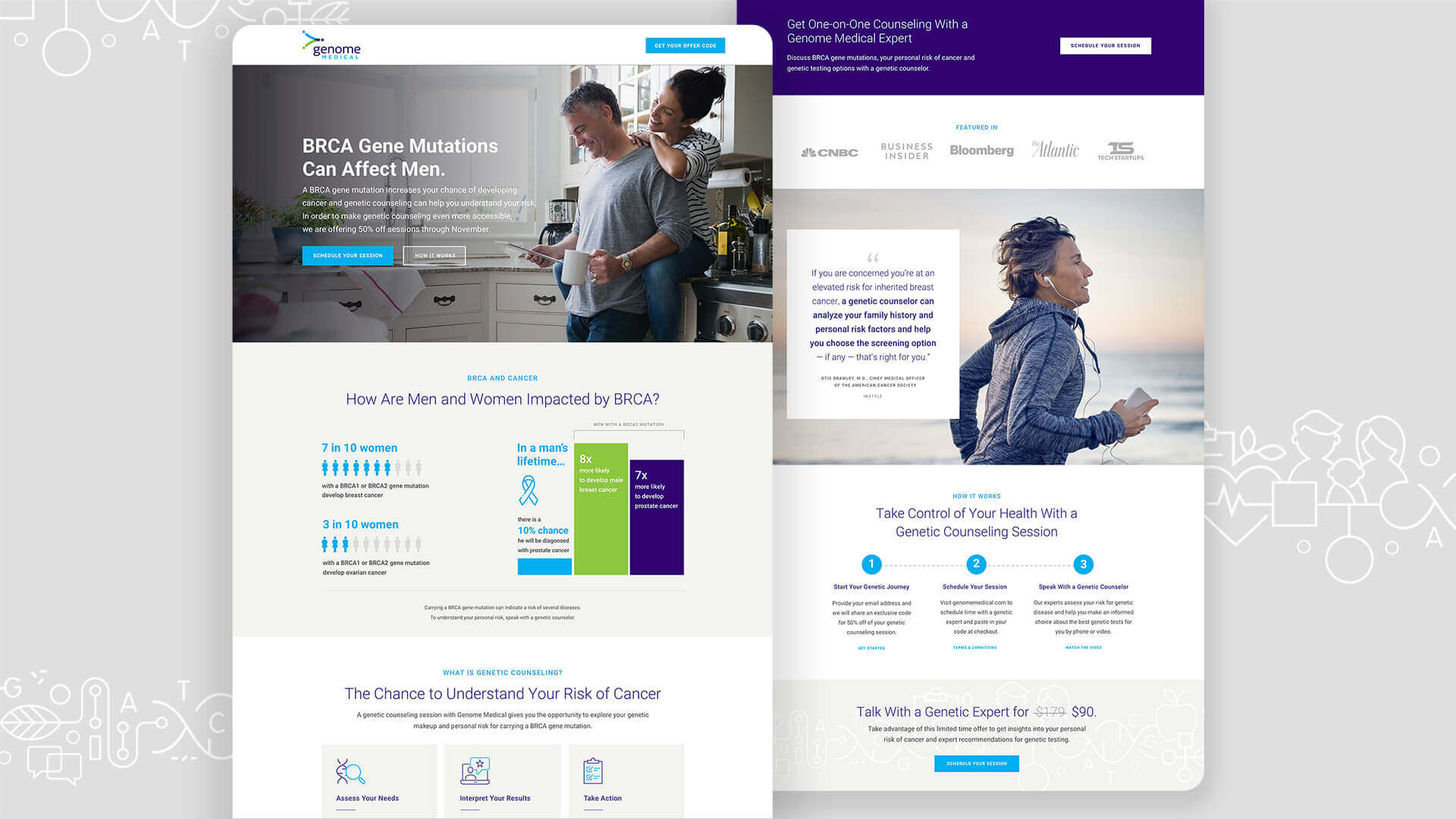 Facebook and paid search ads linked out to the landing page that maximized our ability to oversee consumers throughout the entire customer/user journey. The Facebook carousel ads were aimed at gaining the interest of passive yet qualified consumers in our primary and secondary audiences while our paid search ads aimed to convert researchers looking for more information about the BRCA gene.

Through testing, we were able to determine the keywords and pricing consumers were most and least likely to convert with throughout the entirety of the campaign.

As soon as we launched the campaign in October, we began seeing increases in genetic counseling sessions.