Inspiring an Emotional Connection through Social and Video Advertising 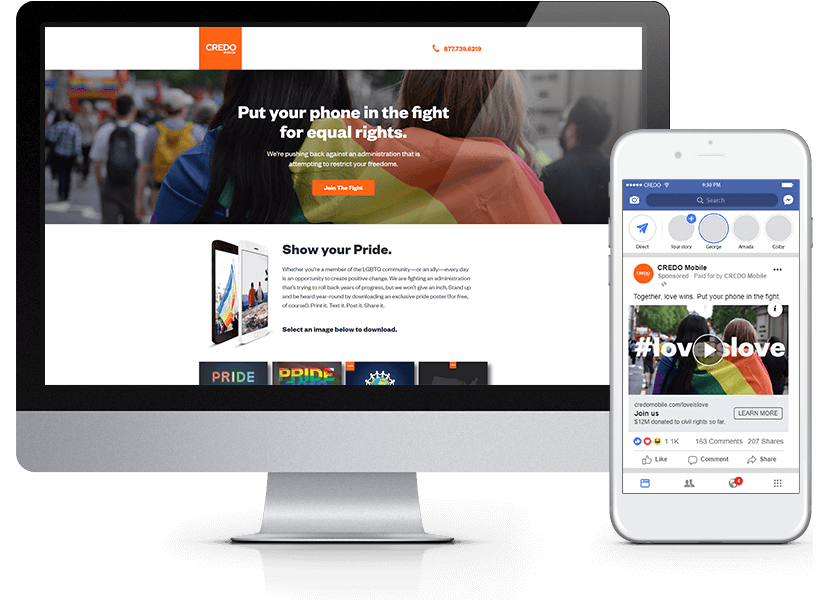 CREDO Mobile isn’t your run-of-the-mill mobile phone company. The organization uniquely integrates retail with progressive activism and philanthropy by donating a portion of revenue every month to progressive nonprofits. Over the last 30+ years, the organization has donated more than $87 million in support of issues like women’s rights, the environment and social justice.

Now, more than ever, people are being saturated with ads, and it’s becoming more and more difficult for organizations to stand out in all the clutter and noise. This is especially true for a company like CREDO Mobile, who’s message is emotional and complex. CREDO Mobile selected Noble Studios to harness their message and communicate it in a way that was quick, identifiable and powerful.

To achieve this, Noble developed a digital ad campaign that interweaved brand strategy, creative design and advanced audience targeting in a way that was all backed by data and analysis.

1. Each target audience had a very different reason to believe. Previous digital advertising campaigns run on social had shown that the mobile phone company resonated with multiple activist audiences. The catch? Each audience had very strong, but different, values and reasons to believe in CREDO. The audience gets even more complex when you add in the varying likelihood of each audience to purchase a phone and the different triggers for that purchase. Without the correct messaging with the right timing, their customer journeys stalled out long before purchase.

2. Ad messaging didn’t stand out against the competition. The telecommunications space is extremely competitive and dominated by a few massive conglomerates. At the time, CREDO Mobile’s digital advertising focused on deal-centric messaging, not progressive causes.

3. Brand awareness was low with the target audience. Their ads were retargeting a narrow audience that was already aware of the company. They needed to identify a target market that comprised of qualified prospects in-market for a new phone who also strongly identified with the brand’s values and supported causes.

4. They needed a major impact on a tight budget. Sticking to the budget was crucial. They already had video assets available, but the videos were edited in a way that was disjointed and didn’t communicate the company’s story and unique value proposition.

5. It took more than one touch point. Making the switch to a new phone company – particularly a lesser known one – is a major decision. Before convincing potential customers to shell out the cash, CREDO first had to build a relationship. This strategy would take multiple touch points from various channels including integrated social, video and programmatic media.

6. Generating conversions was the North Star. Although growing brand awareness would play a major role throughout the campaign, the phone company’s primary goal was to generate sales. With this in mind, there needed to be a unified tracking system that would allow all channel activity and conversion attributions to be measured accurately and efficiently.

The real differentiator for CREDO Mobile is their brand platform. Their digital advertising wasn’t communicating that messaging in an emotional and inspiring way. So, to raise awareness and create an emotional connection (because we believe you have to “connect to convert”), we determined video would be the perfect medium to experiment with.

But we didn’t start there. Early on, we knew that this project was about more than just creating something that just looked cool or just performed well. In order to develop a concept that embodied creative digital performance, we needed to gather all the right minds in the room to consider the project from different perspectives. From these initial brainstorming sessions, a concept emerged that showcased creativity working in line with performance.

We looked at CREDO Mobile’s existing customer base and platform analytics from audiences who had previously interacted with their ads and made a phone purchase. After some digging, we unearthed the opportunity to focus on three key interest areas.

For all three audience groups, the team made sure to layer demographic, geographic and behavioral identifiers that signaled the audience could turn into phone purchasers. For example, the targeted audiences must live in the U.S., fall between the ages of 35-54 and are in the top 40% of household incomes in America. The programmatic channel lends itself to an even deeper level of audience targeting. For example, to ensure programmatic ads were targeted solely at qualified phone purchasers, the team layered in credit score information available through third party data providers. Adding in programmatic media and layering in credit score increased overall sales from the digital channel by 133%.

After identifying the three unique audiences, the team got to work storyboarding and developing scripts. The scripts were written to inspire, empower and promote positive energy. Instead of voice-overs, the videos relied on typography and music to tell the story. They were designed to work with or without sound because 85% of people watch video on social media without sound.

The end result? Two 15-second and two 30-second spots that would run on social and programmatic media. Each video also had a unique landing page that integrated seamlessly with the message in the corresponding video and additional campaign assets, such as banners and text ads.

A Place to Land

Each video ad had a corresponding landing page optimized for the audiences. The content was written around the rallying cry to Put Your Phone Bill in the Fight and related back to the specific cause. We wanted to provide video watchers with enough information to make a decision about switching to CREDO Mobile while empowering people to take action by signing petitions and voting for progressive organizations, which CREDO Mobile would donate to.

Video campaigns were run on Facebook and YouTube with supporting banner ads run through programmatic media across multiple ad networks. Rather than targeting interests on YouTube, we utilized keyword targeting to reach the intended audiences. We immediately saw a difference in how audiences engaged with video between the two platforms. On YouTube, people spent a longer amount of time viewing a video ad, but they weren’t as likely to stop what they were doing and click through to the CREDO Mobile website.

The Facebook audience was the opposite, viewing the content for less time but more likely to click through and leave the platform for CREOD Mobile’s website. Because of this, we discovered that YouTube could be better utilized for brand awareness, while Facebook was more likely to drive conversions. Leveraged in tandem, we were able to both increase brand awareness of CREDO Mobile and the causes they support while driving more revenue to their bottom line.

Several key metrics were identified to measure the effectiveness and impact of the social and video ad campaigns for CREDO Mobile.

2. Audience Retention: The average amount of time that a video was viewed before users either clicked through to the landing page or moved on.

3. Social Engagement: The number of times the video was shared on the platform. This KPI was used as an indicator of how relatable, impactful and shareable the video was.

5. Retail Conversions: The number of phones purchased during the campaign’s run showed the effectiveness and viability of video as a long-term strategy for CREDO. Phone purchases increased 14% after launching an integrated social and video media strategy.