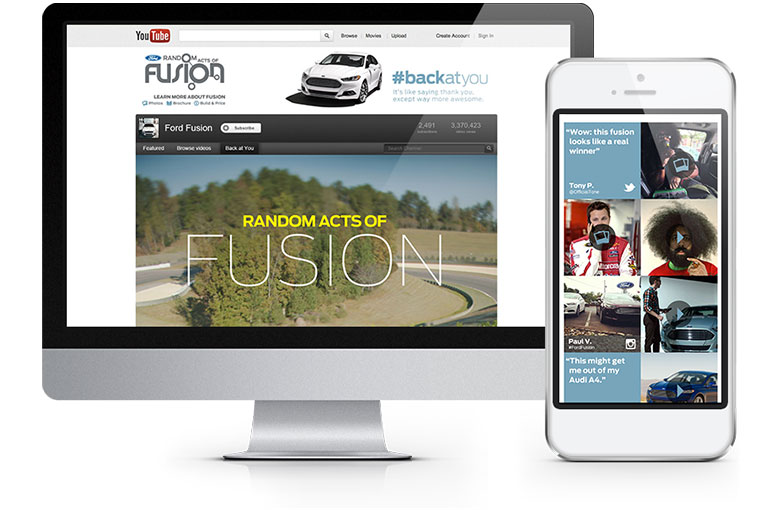 In fact, the share of new cars purchased by 18-34 year-olds dropped 30 percent in the last five years, according to Edmunds.com. With this sobering information in hand, Ford Motor Company knew a fresh approach was needed to attract this audience.

When Ford released the 2013 Ford Fusion + Hybrid, the car company sought to create a buzz in the marketplace.

Armed with engaging video content, Ford sought a visual way for people to interact and have a conversation about the Fusion. People were invited to “tell the world what you think” about the new hybrid.

Consumers love to talk and be heard, and this Ford Fusion application gave them the platform to do just that. #fordfusionshiftedourgears

Noble Studios built fully customizable YouTube and Facebook tabs to showcase the 2013 Ford Fusion + Hybrid. We also designed and developed a mobile version of both experiences. The social app captured thousands of customer comments to create a visual, interactive interface which actively responded to a user’s mouse movement.

Ford could highlight several videos within the header carousel. Each video had a trackable social share element which helped gain a better understanding of which videos and social networks were most popular. Deep linking capabilities ensured targeted users were seeing particular videos first in the carousel. The mobile and tablet experiences were controlled with gestures and swipes. Ford controlled the layout order of each section through the CMS.

The campaign attracted a large mobile and tablet audience, which comprised 57% of the site traffic.

We used key performance indicators to change up the site’s architecture in an effort to continually improve the user experience. With a high volume of the YouTube audience on mobile, we retrofitted the site from adaptive into a fully responsive layout. We also designed layout to keep visitors on the site longer.

As a result, the campaign attracted 2,757 new subscribers on its YouTube channel, with the top YouTube video being watched 132,927 times. Facebook likes also increased by 27 percent over 10 months.